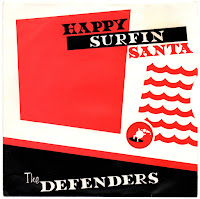 b/w Christmas Up On Venus
As a post-script to the earlier Zen Alligators post here is the Dublin all-star Benefit band's only 45
The short-lived group The Defenders [Active July '79 - Oct '79] were formed to help Dublin-based Heat Fanzine* pay legal costs to U2’s manager Paul McGuinness.
McGuiness had objected to an article in Vol. 2, No. 2 of the fanzine entitled “McGuinness (Isn’t) Good For U2′”.

The article accused him of using back-handed tactics to bump a rival local band [Rocky De Valera & the Gravediggers] from the bill & get U2 the prestigious support slot to Joe Jackson at his Trinity College gig.   --The story was later proved to be wrong. --
*Heat was one of the most well-respected and well-designed punk fanzines in the 1977-79 period. Co-owned by Ray Gunne [AKA Jude Carr, Eamon’s brother] and Pete Nasty [Pete Price]

A benefit gig at the National Ballroom, Parnell Square was staged on the 25th July '79 and followed in October by the recording of this single at Keystone Studios, released a month later on Guided Missile Records. The label being owned by Jude Carr and Karl Tsigdinos [DJ and graphic designer with Hot Press].
Unfortunately, the magazine had to fold despite their efforts. 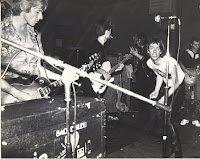 Sounds & Scans
Posted by bristolboy at 06:57