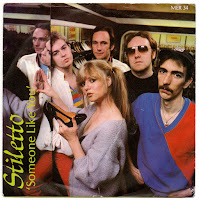 b/w - Secret World
Cool Female Voc New Wave/Powerpop from this Newcastle Band (1979-82)
Brenda "Bren" Laidler (Voc) Ex Hooker
Steve Daggett (Guitar, Keys, Voc) Ex Spicy, Falcon, Kip, Raw Spirit, Electrix, Avalon
Paul Dean (Guitar)
Derek "Del" Nattrass (Bass) Ex Eastside Torpedoes
Alan "Dik" Dixon (Drums) RIP Ex Arbre, Hedgehog Pie
Phil Armstrong (Guitar, Voc) Ex Oasis & The Flakes - Joined betwen the release of their 2 45's. After the demise of the band he played keyboard/guitar for another local New Wave Female singer-fronted group "Erogenous Zones"
Stiletto began life in July '79 as a vessel for Steve & Bren to work the North East club and cabaret circuit (Their first gig being Sept '79) By Jan '80 the other members of the band had quit or been replaced. A live reveiew in Weekly newspaper Sounds got them some A&R interest and February saw them enter the recording studio. By late spring they had declined an offer of management by Barry McKay (Lindisfarne's manager) & were signed to Phonogram's Mercury label.
Someone like you was released in September making Mike Read’s "Record Of The Week" on Radio One which led to them recording a "Radio One Evening Session" for him. The band then undertook an extensive tour of Britain and Germany. Unfortunalely whilst in Germany there were boardroom changes at the top of Phonogram which spelt disaster for them as they were dropped.
With only Steve & Bren still dedicated to the band a new line up was mustered which included, old friend Phil Armstrong. A new recording deal was made with Wonderful, a small independent label which led to the release of their 2nd 45 Video. There was a promo video made, (directoral debut for Geoff Wonfor) plus a live National TV appearance on The Oxford Road Show and a BBC2 Forty Minutes documentary - Things were looking good until they realized that the distributors had neglected to put the record in the shops!  So without a manager or label the band bowed out on their home ground with a gig at Newcastle's Mayfair Ballroom.
Discography
Someone Like You/Secret World - Mercury Records (September 1980)
Video/Pin-Up - Wonderful Records (August 1981)
Extra info
From '82 -'84 Steve & Bren worked as a synth-pop duo (later stretching to a 6 peice with 2 drummers) IT Hz (It Hurts)
Wanna see Bren miming badly with Slade on kiddies TV? go here
For more info and to find out what Steve Daggett is doing now go here
Steve, Phil, Derek along with keyboard player Bob Plimer played together in Heads Held High
Sounds, Scans & Extra
If anyone knows who the Cheap Trick lookalike is or has any more personnel info please leave a comment.
Posted by bristolboy at 09:10 2 comments: