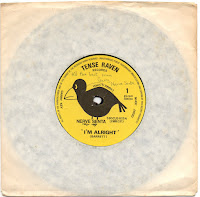 The A-side label does mention "Kev" as Bassist (Typo?) plus; Who is Andy?

In '81 the band's promoter/manager Dave Leaper introduced the band to Ian J Cole as the they were looking for a keyboard player to 'fill out their sound'
An audition was held at New Earswick village church hall. 1 month later and they were entering Fairview recording studio in Hull for 2 days recording of the LP.
5 months later & 1 mini tour of the working mens clubs, Ian was fired

Sounds And Scans
Posted by bristolboy at 04:39 No comments: