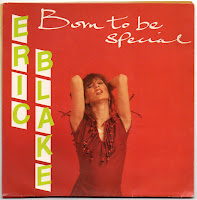 The Band formed as a trio [Alan, Julie & Mick] in Dec 1978. Based in the Basildon/Southend area, they added Bob Timms (Rhythm Guitar) and Julie's older brother Bob Harding on Drums a few months later. By Sept '79 they had won 2 local talent contests & gained Tony Coulton as a manager, this then led to them being signed to Carrere in March 1980 [for a 3 single deal]
Their 1st 45 [Sin City] was unfortunatly banned by the BBC [due to the lyrical content - which not being written by them must have rankled]

By the time of recording their 2nd 45 Ian had replaced Bob H on the drum stool & Bob T was on his way out.
As with the 1st 45 Carrere once again forced them to record someone elses [Jeff Chegwin] words for the A-side.
I'm not sure how the story ended but I guess by the end of 1981 the band was no more.

Alan explained to Malcolm Dome in Record Mirror [01-11-80] how their name came about:
It's a purely fictitious character and came about when I was in London with a few friends. We'd had a bit to drink' someone mentioned that name in conversation and it stuck in my mind.Later on we thought "hey Eric Blake, that sounds good for a rock band". Previously, we'd tried all sorts of weird names, such as Passing Wind and none sounded as instant as Eric Blake."

Useless info 1 - If the band were asked to sign their Sin City 45 they would always sign The Zero 6 side.

Posted by bristolboy at 08:27 No comments: