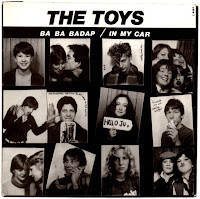 In 1981 Jerry Short & Mike Sparks teamed up In Bristol based band "Streets Ahead"
Going by the Insert for the 45 it appears The Toys may have slimmed down to a Trio of  Clete, Phil & Dave. (Another clue to this would be that the dead wax reads "Where's Jerry?")
Sounds, Scans & More
Posted by bristolboy at 04:01 No comments: 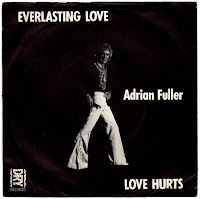 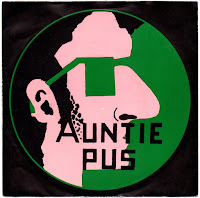 Julian Isaacs, was an enthusiastic solo Musician/Performer known as "The Public School Punk Rock Balladeer" - although he was kicked out of Kings College, Wimbledon
Sounds Reviewer "...any man that sings like this must have something going for him, deafness for example"
How did this one-man old style rock ‘n’ roll guitar act score a support slot with the Damned?
He was Originally From Wimbledon South-West London & was best friends with 2 brothers who were in Chris Millar's (Rat Scabies of the Damned) 1st band. Julian was invited to support The Damned (due to his manager at the time David Scott promoting the gig) at the Hastings Pier in July '77, where he appeared on stage wearing his old public school blazer and cap
The 45 Recorded was in 1978 (at Pathway Studios) with production by Dick Taylor [Pretty Things] Yet it was released a year and a half later, in October 1980 by Septic [Spartan] Records, being specially created for this purpose by the Ruts Manager Andy Dayman (with whom he was touring extensively with at the time).
Apparently a second 45 was recorded for Spartan but never released
As well as being a solo Live Performer He also gigged as Auntie Pus & The Men From Uncle
with at various times
Dick Taylor (Guitar)  Pretty Things
Mark Sullivan (Guitar)
Robin Bibi (Guitar ) also in John Dummer & Helen April's True Life Confessions
Artyro Bassick (Bass) ex-Lurkers also in John Dummer & Helen April's True Life Confessions
Ed Case (Drums) Ex Hazel O'Conner, 999
Danny Heatley (Drums) Ex The Satellites
Pete 'Esso' Haynes (Drums) ex-Lurkers also in John Dummer & Helen April's True Life Confessions
Useless Info 1 - Early in 1977 he entered a Melody Maker talent contest being put into the folk music heat He played 4 songs in 10 mins [a Jerry Lee Lewis cover, a song about an abattoir + the 2 that eventually became this 45] - he didn't win!
Useless Info 2 - The sleeve was designed by Rachel Howard, who's father Oliver Howard designed the Ruts "Grin 'n' Bear" it sleeve
Useless Info 3 - Stories are told that he was a tad "light fingered" relieving large department stores of their electrical goods & redistributing them to fund himself
Useless Info 4 - Marmalade Freak appears on Messthetics #102 [D.I.Y. 77-81 London 2] &  Messthetics #5 [UK D.I.Y. Post-Punk A 1978-81]
*Although Jim Payne was a member of The Stukas, he never recorded with them: this single turned out to be his sole credit: he died in a hang gliding accident aged 25.
More info Here  & Here
Sounds & Scans
Posted by bristolboy at 05:56 No comments: