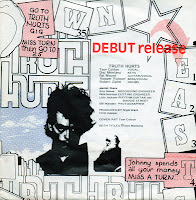 Interesting A-side from this North East based band of which I know very little about.

with help from Lido Jackson & his guitar on Boogie Street

The flip is not really my cup 'o tea nor the funky guitar, it's his voice that makes me want to listen to it again (I'm reminded of someone else but I really can't put my finger on it.)

As usual when I can't tell you much about the band I'll pad it out with other snippets; such as; it was probably recorded at the Fairview Studios in Hull as the recording engineer was Roy Neave &  it was produced by Nigel Ward

The Record was released on Evolution Records* so here's a discography of the 45's (N.B. most of the sleeves [If they have one] are poster sleeves)

* Evolution Records was a subsidiary of RCA [whose warehouse staff had a tendancy to "Strike" at a moments notice] - I guess that's why these records are hard to locate. 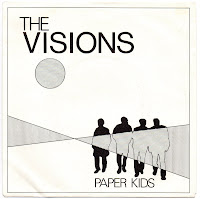 Cool Powerpop on the A-side with a more XTC orientated B-side.

Even though this is a Dutch only release (Top Hole Records - June 1982) the band were from the UK (Chailey, East Sussex)

The 2 sides were recorded at different times in different countries with different producers.
Paper kids - Recorded December 1981 at Blue Tape Studios Luinjeberd, Heerenveen, Holland. Produced by Michel Hoogenboezem
The Ghost - Recorded May 1981 at Safesounds Mobile Studio in Chailey,UK.
Produced by Doug Siviter & Phil Siviter (If you do one thing today follow this link) the brothers are infamous for giving us the earlist recorded output from Bruce Dickinson (1977) & for being the brains behind The Shots

Later
After The Visions, Steve Reeve and Charley Foley along with Mick Neaves (Drums) became LAT - (releasing 2 tracks on the VA LP Tracks On The Green). Steve was also a member of "Over Seven Foot Long Soul Band" & more recently The Koan Brothers

The band apparently gets a brief mention in "International Discography Of The New Wave Vol. 2"

Finally - if you want this 45, it looks like you can still pick up copies from Top Hole
Posted by bristolboy at 07:29 1 comment: 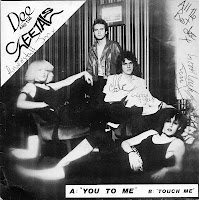 Cool New Wave from this Doncaster (Armthorpe) 4 peice. (Touch me being the better track if you ask me)

The 45 was produced by Jan's brother (?) Jeff Carline (Guitarist for Uncool Danceband) & they were Managed by Father, Frank Carline.

Dee, Tim & Jan had previously been 3/4 of  The Shy Tots who released 3 tracks on 2 compilation LP's
Logical Steps (Waiting For Stardom & Oyster)
Bouquet Of Steel (Robot Maid) - d/l the LP here
The remaining member of  The Shy Tots (who kept the name) was Dennis Hardcastle who went on to release another 45 under the name in 1982 (Gallery) - If you followed the link you'll have noticed the new band also incorporated Ex-Fall member Yvonne Paulette on keyboards & Tim again on Bass.


Previous to The Shy Tots, Tim had also played on the (1978) Charlie Webster – No Horse Town LP & post Dee & The Cheetahs he took over bass duties from Mathew Seligman in the Louth (Lincolnshire) band Still Life. He currently gives Bass tuition if your interested in a new career

For a while I wondered if  Dee was the same singer as in Dee & The Monitors (apparently not!)

Labels: -UK, Dee And The Cheetahs 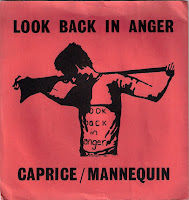 b/w - Mannequin (Double A Side)

I was asked for this a few months back (I'm not sure why as it has already been posted elsewhere) however on looking around it seems the information is quite scattered so...

Firstly this is Post Punk / Goth so now you know (honestly, I saw this being sold as powerpop a few months back)

The Hampshire (Waterlooville*) based band began life in 1980 whilst studying for A levels at Havant College to create a "musical version of the eponymous John Osbourne play." (their 1st public appearance being at the Merchistoun Hall in Horndean, performing a subdued synth-based set that included a cover version of Black Sabbath’s “Paranoid”)
The band then were Michelle Ebeling (Voc), Jim Newby (Guitar), Steve Butler (Bass, Keyboards), Rick Butler (Drums)

*I say Waterlooville based as three of the band lived there but Jim was from Swanmore - In the early days, rehearsals took place in the Butler Brothers record shop, Focus Sounds (yes in Waterlooville)

Later
Gary Hawkins joined  The Remayns & was a technical assistant for the Bam caruso record label
Jim Newby AKA Sean O'Farrell joined  The Fifteenth,  & Splashpool
Michelle Ebeling sang backing vocals  on Mankinds Audio Development + for The Cult (The Gimmick)  + Balaam and the Angel (She Knows)

Labels: -UK, Look Back In Anger 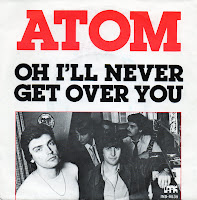 b/w - I Could Never Take Her Away From You


Catchy as hell A-side from the pen of Claude Taylor - I warn you, once heard not forgotten!

It's hard to describe but I'd say a Bubblegum / Glam / New Wave Pub Rocker, which should cover it!

It's released on the Belgium / Holland label Lark

I can't tell you anything about the band except (I'm guessing here) that they were probably brought together for this release by Bobby Patrick & at least one of them is from our fair Isles.

The production (Tommy Boyce) / engineering (Phil Chapman) team are also of a decent calibre, with the tracks being licenced from Interworld Music Ltd (set up by John Velasco for the British end of the publishing house Bertelsmann Group (BMG), in 1977) 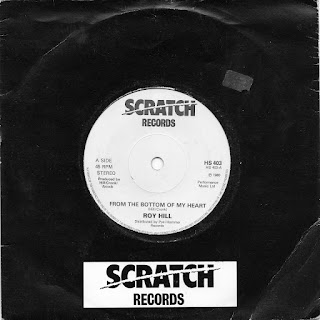 Nice pop/rock on the A-side & an ever nicer track on the flip - I'd say someone had been listening to XTC.

There's a myspace that also fills in some of the gaps. 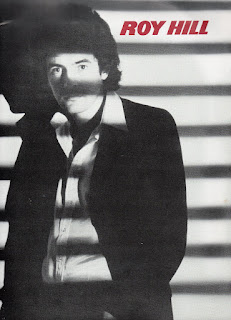 Sounds & Scans
Posted by bristolboy at 08:01 No comments: