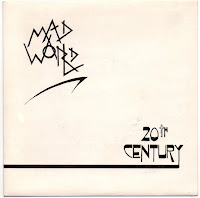 b/w Show A Little Of My Love

20th Century were more of a collective, having their beginnings sometime in the 1950's producing a number of touring folk and rock groups, a recording company "Reflection" and a number of solo artists and composers.

As I'm not really interested in the folk/prog side of it, I'll just give you the band members from 1979-82.

Posted by bristolboy at 07:01 No comments: