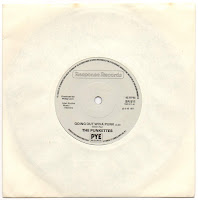 
“Punksploitation” - The short-lived practice of putting together a group of Seasoned Session Musicians and asking them to produce a loud and/or crude punk single in order to quickly cash-in on the punk “fad” that was peaking in the late 70s.


OK, So this is a Novelty Cash-in 45 [More than Possibly for the Christmas Market, as it was released Nov '77] However it's the B-side that has grown on me over the years.