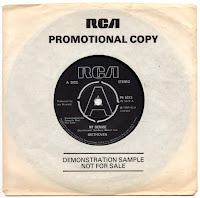 First of 2 solo 45's for London based Peter "Beethoven" Vas

After an unsuccessful audition as a second guitarist for the Sex Pistols (he had replied to an advert in the 27th September 1975 issue of Melody Maker) Pete joined Gloria Mundi. He played on their 1st 2 releases but was asked to leave the group before the release of their "Glory Of The World" 7" (Oct 1978).
In late '79 he secured a solo deal with RCA and released 2 45's, Again success was not forthcoming.
In 1981 after a meeting at the Crown & Sceptre Pub, London W1 he teamed up with Alasdair Murray to become the short lived Bete Noire [Pete (Guitar, Bass, Drums), Al (Voc)]

If you've any more info on Pete please get in contact.