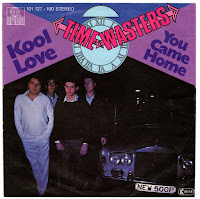 There is a long convoluted history to this band which I'll try to make short.

In 1974 Greg Holt became Music Tutor at Sandwell's Residential Arts Centre, Ingestre Hall. The Centre, near Stafford was the former ancestral home of the Earl of Shrewsbury. Pupils from schools throughout Sandwell spent five days on creative workshops in Music, Art or Drama. This is where Greg recruited the members of the Time Wasters, the main purpose being to encourage their musical development collectively and as individuals. They mostly did not know each other before joining the group.

Over the years the pool of musicians continued to change, with some who had missed the LP sessions returning and several new people being added. There were different performing combinations according to the occasion. Two of those who were on the 1st LP (Tim Pye & Fred Skidmore) and two who had missed the sessions (Jon Pye and Benny Bates) went professional with the name & scored a recording deal with Ariola.
Even after this incarnation more recordings were made under the name at Ingestre Hall until Greg left at the end of 1983 (going to Aston University Arts Centre) and from then on, to this day, multiple home-made albums have been made by several former Time Wasters.

Useless Info 1 - Greg coined the band name as a joke based on newspaper ads of the day for musicians to join bands, that would sometimes end with "No Time Wasters"! So Greg called them "Time Wasters Only" with the generic name for any of the musicians in the group beconing “Time Wasters”
Useless info 2 - when this incarnation of this band folded (1982) some of them became Alvin Stardust's backing/touring band. Tim writing at least 1 song for him "In The Morning"
Useless Info 3 - On The Street [The Title track from the 1981 LP is comped on Powerpearls 5]

Sound & Scans
Posted by bristolboy at 05:03 No comments: