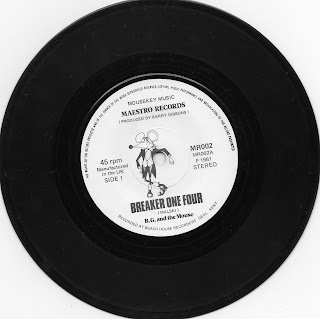 Quirky little tune from the pen of Peter (The Mouse) Malski

I received an E-mail from Peter last week, with the sad news that Barry Gibbons (B.G.) had passed away earlier this month. As I'd obtained a copy of this a few weeks ago I thought it fitting to post it as a (sort of) epitaph.

This is the duo's 1st 45 for Maestro records (2nd here) I'm not sure if there were any session players used but my guess is Mike Fuller (sax) & Mick Jaques (drums) were most likely involved.

According to Peter; the CB jargon was from a "glossary of CB slang" that came with a CB Radio set bought for his then 10 year old son. The tune was hummed into a tape recorder & then sent to Barry, who did the rest.

Labels: -UK, BG and the mouse

The Official Secrets - Fooling With My Heart (1981) 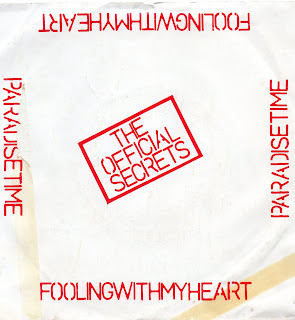 By the looks of the sleeve / labels I'd hazard a guess that they may have been working under the name "the Secrets" but due to the many other bands using this moniker, lengthened it.

Chris Duffy & Phil Cilia later went on to fame (?) as Waterfront who have a myspace 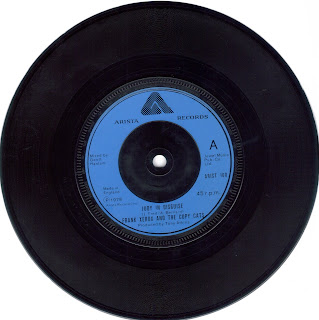 There's already plenty of info on this over at 45 revs

Just In case you can't be bothered to click on the link though....

If you like Judy In Disguise there's also an interesting synth-pop version of it by the Silicon Teens or a straight bubblegum version by ?

Eugene And The Syncopaters - The Great Romantic (1980) 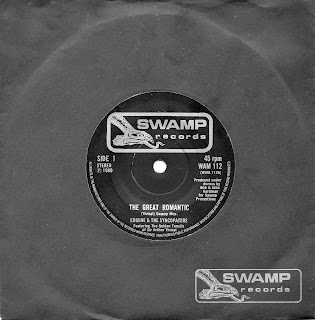 The record utilizes the "golden tonsils" of Sir Arthur Throat on The Great Romantic & there is a "vocal extravaganza" from Nigel Nasty Sandwich on Kitten Kicker.

For a better 45 on this label go here

Labels: -UK, Eugene And The Syncopaters 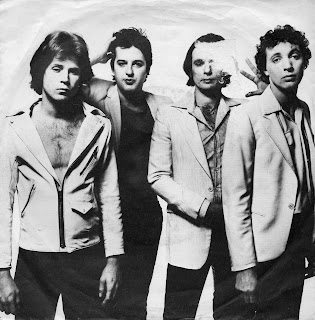 Great powerpop on the 1st track but the other 3 are just good rock tunes.

I've put this down as Dutch but the band was one of many for Canadian born & Californian living Neil Merryweather (voc bass) who was living, working (producing acts for Dureco Records) in Amsterdam at the time.
The story goes that he was friends with Cees Wessels (head of Dutch RCA Records) who wanted him to record some follow up tracks in the same vein as one of his earlier bands (Space Rangers) So he was signed to RCA & brought Michael Willis (guitar, voc also ex Space Rangers) over from Los Angeles. They then augmented the line up with drummer Cees Meerman from Herman Broods Wild Romance & Ken Spence (sax & Rhythm guitar) from Nina Hagen’s band.
In the middle of winter '79, the band left for Northern Holland to record an album “Radical Genes” at the Spitzbergen Studios. All 4 of these tracks are lifted from it.
Once the LP was finished Cees was replaced by Belgian drummer Rogier Wollaert & the band toured the record at small town venues around Amsterdam.
The band folded, as Willis returned to California. 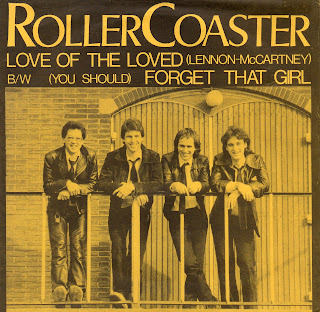 b/w - (You Should) Forget That Girl

The Stuiver brothers started the band in '77 along with drummer Ronald Visser & a 4th member who tragically died in '78. The band laid dormant until '79 when Hager & Rijen joined. This 45 being released in Feb 1980 (A cover of The Beatles' then-unreleased "Love Of The Loved" financed by the Beatles Unlimited magazine in a print run of 500 numbered copies).
On the strength of this recording they were offered a recording deal by Torso Records (same label as the Rousers) for which there are 4 recorded (June 1980) but unreleased tracks gathering dust on a shelf somewhere.
(The Tracks are Can't Stop / So You're Sorry / Night Of Romance / Come On Home)
The reason they are unreleased was due to an internal argument over another possible deal (Bert Vegter -manager of Teaser and Turbo - was starting his own record label, Pure Gold Records)
This disagreement ultimately led to Henk Hager leaving to start his own band "The Cast" & being replaced by Erik Compeer who is name checked on their 2nd & Final 45
(You Should) Forget That Girl / Come On home (1981 - Pure Gold records).
He apparently never played on the 45 & only lasted a few weeks before being replaced by Peter Alberts (also ex 909)
The Band split in November 1981 when Rijken & Alberts formed "The Few" with ex Rousers Bassist Rob Marienus. 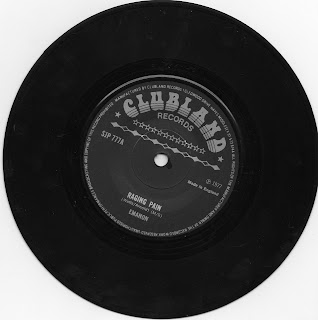 Love this 45 - It's taken me ages to get a copy (unfortunately it's without the stamped die-cut sleeve) so now it's your turn to hear & probably want!

If you've followed the link. You'll have read the blurb & as I can't add anything to it it's a short post today! 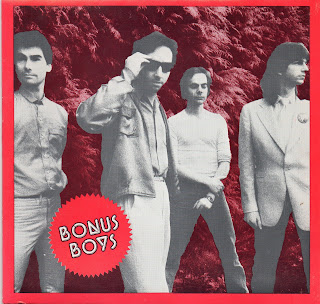 This is for Razor over at short sharp kick in the teeth who has just posted their 2nd (& final) 45.
There was a 3rd "So Sad / Head For The Hills" that was recorded but unreleased ( I'm not sure if there are any promo/acetates around)
BTW the 2nd 45 was released due to them winning recording time from a Vancouver "Battle of the bands" contest - beating amongst others the Modernettes (punk Powerpop) / Microwave (Rock) & Volts (Rock)

There is a myspace here where you can hear the aborted 45 & get a decent bio on the Bonus Boys. 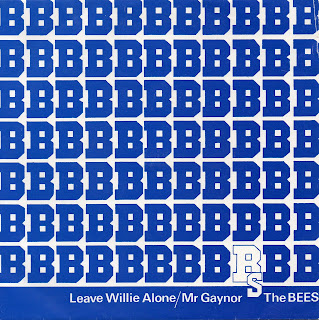 According to the label Owner Terry Friend it was a toss up between signing The Bees or another local band The Varicose Veins. He obviously choose the Bees, who promptly broke up just after the record was released. (For him a regretful choice - For us another great tune)
Coincidentally Terry's label release before The Bees 45 was The Bleach Boys on Tramp records (TRAMP THF002) 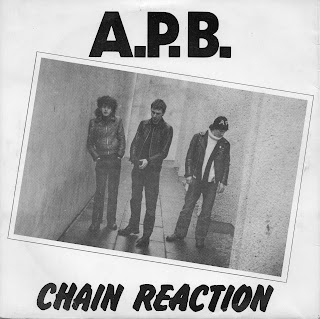 Time for a bit of Pop Punk from this Scottish (Ellon) Trio.

This was the 1st of a bunch of 45's but their best D.I.Y. punk offering.
Their 2nd 45 is much more post-punk/funk & then it's all "funky bass guitar" there-after until their 1987 45 Missing You Already/Best Of Our Love - Red River Records which is pretty good indie 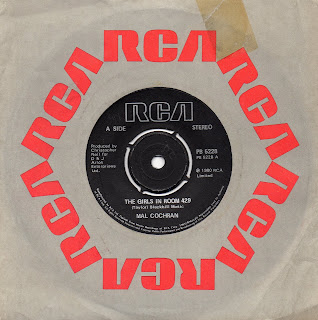 Well I guess I'm going to have to start posting some things that I have some info on soon but I couldn't resist putting this cool, pretty much unknown powerpopper out.

Both the 45's were produced by Christopher Neil - It's a wonder these 45 weren't hits with all the big guns behind them! 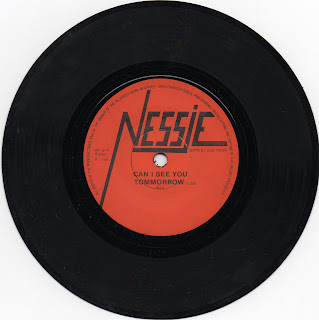 Another non starter for information I'm afraid - pretty sure they were from the North somewhere!

It often gets passed off as powerpop (which it sort of, is, I guess)
If you ask me however, I'd say its more of a decent Rock / New Wave crossover tune.

Both tracks were penned by Bar 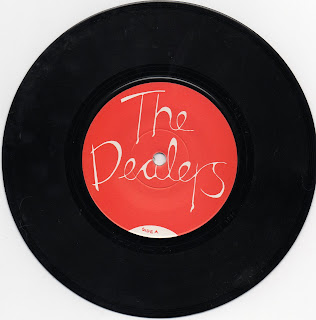 Both side are cool powerpop

Before shortening their name (& their line-up) to "the Dealers" the Birmingham based band were the Mean Street Dealers
They also released (in 1980) the Time Is Tight EP on Inferno records as the Ska City Rockers (If anyone wants this posted - leave a comment!!)

Personally, I prefer Tracey for it's no nonsense pop feel 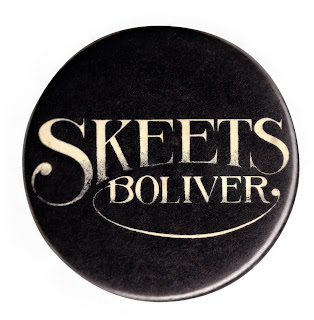 Here's both the releases from this Scottish (Dundee) pub rock band.
The band was formed in 1973 from an amalgamation of two bands (Hens Teeth & Mort Wriggle & The Panthers) & originally included

But by 1977
Arlene had left
Peter McGlone (Sax) had joined &
Jog Had been replaced by:
Brian McDermott on the drum stool - If you can follow that you can work out the line -up for these 2 45's

90% of this post is pieced together from posts at the Retro Dundee blog - so to them I thank you! 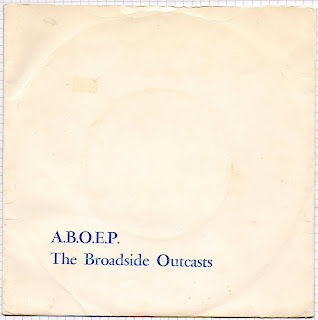 Clive Burgess (guitar bass voc)
Terry Burgess (acoustic guitar voc)
Steve Cox (drums voc)
Steve had left the band but his replacement (Huw Jones) quit just after the recording studio had been booked so he stepped in to help out.

Terry Burgess (now living in Reading) records as the "Fabulous Bingo Brothers" which once was a four-piece including Clive, younger brother Pete & Dave Walker. 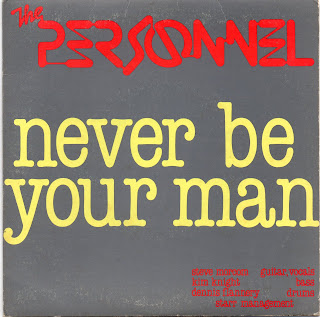 The 3 had been playing together in various bands since the early 70's (Rainbow, Eskadium, Tuesday Morning) 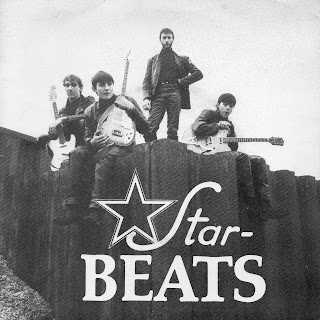 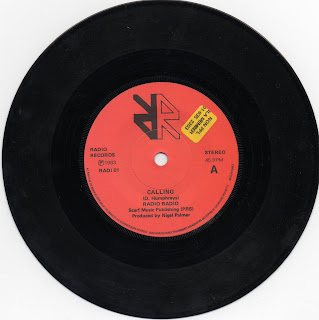 The band members were.

It was produced by Nigel Palmer
There were also 2 other tracks (Boys In Blue & All Eyes Are Blind) released on a compilation LP The Tunnel T1 released on Tunnel records (T42) with 5 other bands
(the bands being: Street Princess / Corporal Henshaw / Major Setback Band / Silent Among Strangers / King Kong & The Empire States)

She Saved My Life 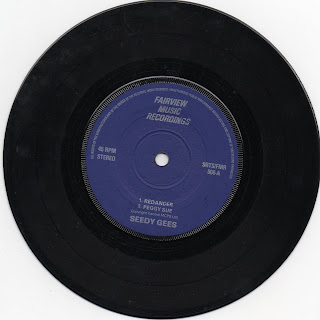 There's very little I can tell you about the band. I believe they were from the Hull area & were at least a quartet

Members may have been 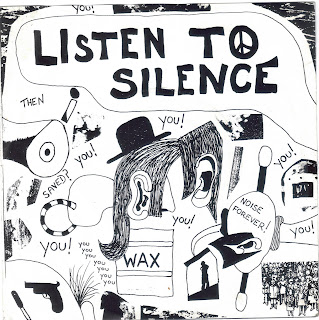 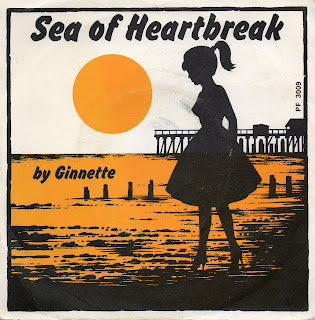 Not to sure about the A-side (It's sort of county & western mixed with an 80's ska sound)
Changes; however is a great New wave / powerpop tune - think early Go-Go's with a Knack beat

I'm also at a loss to tell you anything about Ginnette except this was her only release. (Unless of course Ginnette is Little Ginny in disguise)

The 45 was produced by Paul (P.K.) Kirkby who also had a fairly decent 45 out on the same label (Pastafont - l think the Surrey based label may have belonged to him as he seems to have produced most of them! - discography in the download if you're interested)
The sleeve was designed by Mick Sparksman