OK - Now my Divshare account has been Deactivated. The only word I can think of is "Boring"
Posted by bristolboy at 07:52 1 comment: 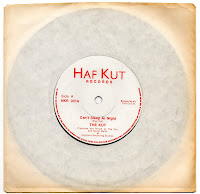 2 New Wave tracks from this Scottish (Inverness) Band that are very much in The Police style. Faithful being the better track to my ears.

Unfortunatly I don't know much about the band, the Drummer was Kevin Mcloughlin & another member was Donnie 'Kenya' Fraser (unless he was their manager)

The band aparently began life as The Kick before changing their name to Kut (I guess because there was already at least 2 bands of that name around at the time) Again I can't be sure if they managed a full UK tour but they did venture South to play London's The Marquee Club.

The 45 was recorded at the (24 track)  Highland Recording Studios in Gollanfield, Inverness & produced/mixed by the band with help from David Balfe

Sounds & Scans
Posted by bristolboy at 00:26 No comments: