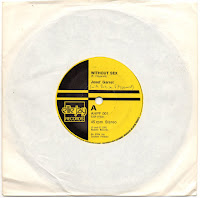 Two striped back tunes from East London Folk-Punk troubadour Patrik Fitzgerald, his Guitar & a borrowed Revox on this, his 7th 45 release.
The 45, released under a pseudonym was funded by Uber fan Andrew Hoddle who liked the 2 songs, so dug into his own savings & got some copies pressed up with ellie jay records.

The name comes from an almagamation of Patrik's middle name being Joseph & the economist Garret Fitzgerald + poets wrote and lived in garrets.

If you want to know more about Mr Fitzgerald Go here

Posted by bristolboy at 05:04 No comments: