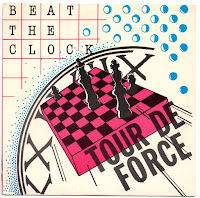 Great New Wave from this London based, Harvey Goldsmith managed all girl group (1978-1982)


*Painted Lady [1975-78]
Conceived as a pub covers band, school friends from Wandsworth, South London, Kim McAuliffe (Voc, Rhythm Guitar) and Dinah Enid Williams (Voc, Bass) together with Deirdre Cartwright (Lead Guitar) & Tina Gayle (Drums) formed an all-girl group. Val Lloyd replaced Gayle on drums and they started playing the local pub scene. When Cartwright left in late '77 her place was briefly taken by visiting American Kathy Valentine, who answered an ad in the back pages of "Melody Maker" When Valentine returned to the United States in 1978 [forming the Textones and later joining The Go-Go's] Painted Lady broke up.
McAuliffe and Williams still wanting to pursue a musical career recruited Kelly Johnson (lead guitar) and Denise Dufort (Drums) & in April 1978 the new line-up changed their name to Girlschool [taken from the B-side of the 1977 Paul McCartney & Wings 45 "Mull of Kintyre"]

Useless Info 2 - Towards the end of TdeF's tenure Deirdre Cartwright was also playing with the Jazz/Latin group The Guest Stars & it was one lunchtime In 1983, busking be-bop tunes in Covent Garden with two other "Guest Stars" that Deirdre was spotted by producer Chris Lent who offered her the job of guitar presenter on the BBC's ground-breaking show Rockschool. The two series of BBC TVs Rockschool attracted audiences of 2 million viewers every week in the UK and were subsequently shown worldwide.