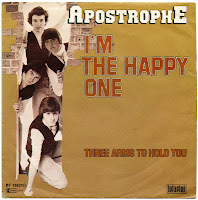 b/w - Three Arms To Hold You

Even though this & their 2nd/final 45 (Sad & Blue / I'm A Clown) were only released in Germany they were actually with the UK based Solid Gold agency team, who also managed The Pleasers
After a few more line-up changes, Warner & Tomkins giving way to Simon King (Keys) & Sean Heaphy (drums) the band re-emerged as Scarlet Party & had a minor chart hit with 101 Dam-Nations

Tomkins went onto play with Air-Race