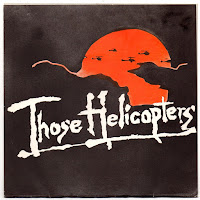 Useless info 2 - Prior to the band's formation Harlan Cockburn had been part of a casual band of staff & students at Maidstone Art College called Vic Damone. [Their rule being that as soon as anyone got halfway good at an instrument, they would to swap for something else.] They would record several times a week, it was these tapes that formed the basis for student David Cunningham’s (The Flying Lizards) ‘Money’ and ‘Summertime Blues’  (Cockburn's home-made guitar can be heard on the intro bars to Money).

Want More ... Go here to hear what Alan Robinson was doing post TH
As the sleeve of their 1st 45 states : Thanks to Marc Arscott [Manager] for the extra info