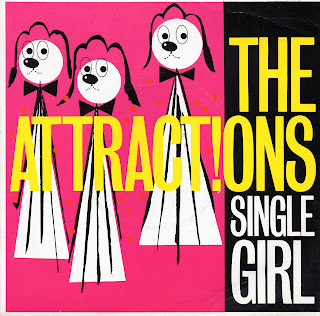 OK, not so rare but definitely overlooked (Why?)
Is it because the boys dared to fly with out Mr Costello I wonder!

Both sides of the 45 were taken from the LP Mad About The Wrong Boy
Of the 16 tracks on the album, Single Girl & 6 other tracks were penned by Steve (under a pseudonym of Norman Brain) & Faye Hart (his then girlfriend) - 4 as Steve Nieve. The remainder (including Slow Patience) were jointly written By Bruce & Pete Thomas (no relation).

Useless info 1 - Nason received his musical moniker "Nieve" (Naïve) while on the Attractions' first tour for Stiff Records: it was bestowed by fellow tourmate Ian Dury who had been astonished by Nason's innocent query, "What's a groupie?
Useless info 2 - The sleeve was designed by Barney Bubbles - the front being an illustration by himself of little china dogs from his parent’s mantelshelf. Whilst the back echoed the innersleeve of their LP using a trick of highlighting certain letters in the condensed font slogan “FBEAT WHERE THE ATTRACT!ONS IS” to spell out the record company’s west London location: FBeat, Acton (6 Horn Lane W3).