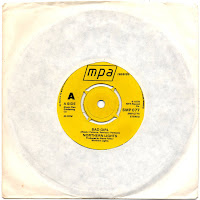 The 45 was recorded at Manchester's Smile Studios and released on the MPA imprint [The Stockport label also released the first Slowguns 45 - which is worth looking for if you haven't heard it]
The Petricco brothers were later in The Spivs
Useless Info   Paul Petricco Started (Amongst others) FAB Cafe, Satans Hollow and TV21 [which hosted ‘Mrs Boon's Cakes & Tea Party’ with Clint Boon of Inspiral Carpets]

Sounds & Scans
Posted by bristolboy at 04:27