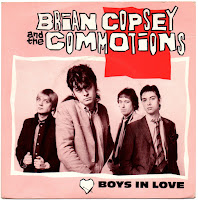 Loz Netto was replaced by Huw Gower (ex The Records 1978-80) for the bands second release.
Chris Wyles was also playing with Victims of Pleasure during his tenure with the band & went on to drum for Shakin Stevens amongst many others.

From Brian's Bio
...when the punk thing took off, I let Hazel O Connor cut off all my hair, and I backed her for a year or so. This was all great fun, but eventually I felt it was time to do something with my own songs, so I managed to blag a month in a residential studio in France with what was basically Sniff and the Tears backing me and a great engineer called Steve Lipson. The resulting album’s worth of material brought me a recording contract with Chrysalis.
It was at this point that things went astray for a while. In my naivity, I thought that I had earned the right to have fun making records, but the label I had signed to was a serious, no prisoners taken, commercial outlet who were used to releasing hit records with career minded people.... Anyway, we spent a year or so at cross purposes, releasing a couple of singles that were well received in Europe, and got good reviews in the British music press, but on top of an unofficial BBC ban on any future recordings, I refused to go touring in America, and from that point on it’s not so much that I was dropped, as we just stopped talking to each other ...permanently

'Play me that twangy guitar and I’m anybody's" - John Peel 10-02-1981
"Brian Copsey and the Commotions were a good band, but they failed to excite record buyers: They were on Chrysalis. They came right out of the blue and they were very hip for a short time. Brian Copsey was a Bryan Ferry with a bit of the lounge lizard about him and they were a good rock band. Although Brian wrote a lot of material, Chrysalis wanted me to cut the band on the Buddy Holly song, ‘Love’s Made A Fool Of You’, which became a single. Other titles included ‘Shavin’ With The Lights On’, ‘King Of The Hop’ and ‘Shirley In The Rain’, but not everything was released. They didn’t last long and I stole the drummer, Chris Wyles, to replace Howard Tibble in Shakin’ Stevens’ band.
I would chop and change players like that, so everything has a benefit in the long run.”
- Stuart Colman (Producer) RIP
Sounds & Scans