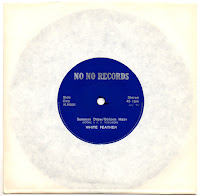 b/w Feathered Girl
A Fine DIY / Psyche-Lite 45 from these Nottingham area boys (19 at the time of recording)
The 45 is from two different Recording Sessions. Although the Studio remains the same the players differ very slightly.
The Studio was Stu Stevens' (Engineer of the 45) Eagle (Ash) Studios, Annesley Woodhouse.
Summer Days / Golden Haze [14-07-83]
Cookie AKA Graham Cooke (Voc Bass Tambourine)*
Alan S Robinson (Guitar / Egg Cups)
Darren Warner (Drums)
John Harrison (Egg Cups)
Feathered Girl [12-08-83]
Cookie AKA Graham Cooke (Voc Bass)*
Alan S Robinson (Guitar)
* At this time on hiatus from Solvent Abuse
The Record (513 copies) was released in December 1983
Useless info - For the 1st recording session Darren didn't own drums himself so some were hired the day before going into the studio. Giving him just the 1 night to rehearse the tunes.
For Memories/Bios of the band from the 2 main members follow the links below
Cookie
Alan S Robinson
Sounds & Scans
Posted by bristolboy at 05:03