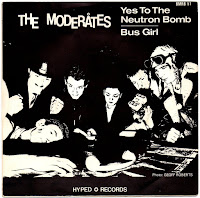 Below are Tom Gould’s recollections of reconvening in the studio to re-work on ‘Yes to the Neutron Bomb’ for a single release.
‘We were offered a contract by Greensleeves records (biggest reggae label), as ska had taken most of their customers, so they wanted to sign some ‘white pop bands’. They set up a subsidiary label called ‘Hyped Records’ for ours and a band [Close Rivals] from Birminghams’ releases, booking us into a 24 track recording studio in London. During the session we realised that they didn’t really know what they were doing, as previously they bought finished tracks from studio’s in Jamaica. This is where we recorded the second version of ‘Yes to the Neutron Bomb’ and ‘Bus Girl’ (Bus Girl was about taking late night bus journeys in Liverpool, as there always seemed to be a young girl standing at the front of the bus talking to the driver – bus groupies?).
Our experience in the studio was awful as we also had an engineer who thought he was the greatest producer in the world, but was more of a hindrance than any help, so the recordings were pretty bad. At the end of the original ‘Yes to the Neutron Bomb’ on ‘Fetishes’, the explosion was created by four of us holding the keys down on the keyboard, which was plugged into a guitar amp with the settings for distortion, reverb, presence and volume on full, so most of the noise was feedback. On the second recording, the engineer could not reproduce it, he used a pretty weak explosion from a sound-effects record instead which sounded really crap!’
Full Discography & Extras
Feel free to leave any extra info/comments below
Posted by bristolboy at 06:05