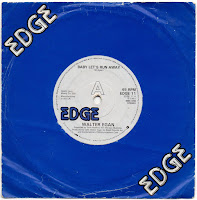 
If you like The Paul Collins Beat Give this a listen..

Baby Let's Run Away is from the LP The Last Stroll [Recorded between 1st Febuary & 17th March 1980 @ Sound City, Van Nuys, California] which correctly uses Run Away as two words.

The Semi-Professional band were:

"I related to my music through how I felt about the music when I was a kid. Rock ‘n’ roll was a salvation, an energy, a coming of age of some sort, a feeling of your own music, a feeling of pure enjoyment. The music has to have the beat, the energy and the intensity. That’s what real rock ‘n’ roll has." - Walter Egan, June 5, 1980 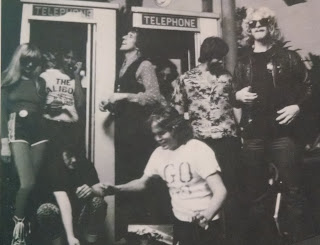 At first glance, Walter Egan would seem to be the archetypal California rock musician. His first band was a surf group, and [in promotional photos] he certainly looks the part. His late '70s/early '80s had C-A-L-I-F-O-R-N-I-A written all over them; they were sunny, melodic and seemed to belong on a car radio with the top down, and the endless coastal highway disappearing from view.

The only thing wrong with that picture is the fact that Walter Egan was raised in New York [at the polar opposite end of the country]. He was born on July 12, 1948 in the Jamaica suburb of New York City, and (like most kids of that age) his first memories of music centered around Elvis Presley on the Ed Sullivan Show. It was the folk boom that inpsired Egan to take up music, though. In 1963 he bought his first guitar and learned how to play from a Kingston Trio songbook.

Egan's musical direction changed dramatically in the wake of the Beatles, and (more especially) the Beach Boys. He wanted to play in a rock group, and formed a band called the 'Malibooz." They were a New York surf band comprising Egan on guitar and vocals, his friend John Zambetti on lead guitar, drummer Tom Scarpe and pick-up bass players. At this time, Walter was so much in the thrall of the Beach Boys that he tried on numerous occasions to call Brian Wilson.

The end of high school meant the end of the Malibooz, although they experienced a brief revival when they recorded a reunion album for the Los Angeles-based Rhino label ('Malibooz Rules').

After the break up, Zambetti and Egan formed another group in Boston while they were attending college. They called themselves 'Sageworth and Drums' (later simply 'Sageworth'). The group was completed by Ralph Dammann on bass, Matt Sheppard on drums and vocalist Annie McLoone. By this point, the vogue for surf music had passed, and Sageworth turned their attention to th latest sounds emanating from California: psychedelia as performed by Jefferson Airplane.

Before long, John Zambetti concentrated on his medical studies, and was repleaced by John Borge and a second singer, Jack Burkhardt, which made the replication of the Airplane sound even easier. The group lasted until 1973, when Egan finally decided to move to the west coast, (just as he was about to make the move) an old bass player from the Malibooz, Bob Donaldson, arrived in town with his new group, Dangerfish.
The group comprised Donaldson, his brother Tom and Cosmo Goldberg. They began playing with Egan and McLoone. "We figured that none of us knew exactly what was going on at that point," said Egan. "We wanted to survive and so, having the contacts from playing the Boston area and knowing the clubs, we just put together a group to play - and that filled the time between the end of '73 and April '74."

Sageworth actually had a few cracks at the big time, and rubbed shoulders with the soon-to-be-rich and famous. However, Egan never trusted any of the managerial candidates who presented themselves, and they remained very much a local act. They played the Bitter End in New York with Jackson Browne, and trivia buffs may care to note that the first time Gram Parsons and Emmylou Harris sang together was in Egan's kitchen. After they started working together, Parsons and Harris performed Hearts on Fire, a song written by Egan and his bassplayer Tom Guidera (who later played in Emmylou Harris's band).

Despite this, Egan still had his heart set on California [more so after he got robbed twice in Boston]. He eventually moved to Claremont, thirty miles outside greater Los Angeles, where he lived with Chris Darrow, then Linda Ronstadt's tour manager. Darrow had just released his first solo album and was looking for musicians to work with him on a promotional tour to be conducted with another United Artists act, the British group 'Man.' The tour even touched down briefly in London.

After their return, Darrow and Egan worked in another band, the Ghostriders, who changed their name to 'Wheels.' They played the California club scene, but, at the end of 1974, Darrow lost his house, and Egan went back to New York to spend Christmas with his family. Back in California, he got a call from Jackson Browne who wanted Egan to help out with backing vocals on the 'Late for the Sky' album. After the sessions were completed, Egan went out on tour with Browne in support of the album, but, despite that, 1975 was a lean year for him. He was writing a lot of songs - in fact, many of the songs that appeared on his first three albums.

Walter Egan's big chance came in the person of Andrew Lauder, later head of Demon/Edsel and Silvertone Records, then an A&R manager at the British division of United Artists. He caught Egan and Wheels at the Troubadour, and, on February 1, 1976, he offered Egan a solo contract. Egan accepted.

Lindsey Buckingham and Stevie Nicks were to produce Egan's first album, and they were completing 'Rumours' with Fleetwood Mac. They recorded the basic tracks over the course of two weeks in June 1976, [but with Buckingham and Nicks' commitments to Fleetwood Mac] they didn't finish the final mix until January 1977.

The record was only released in England, but the strength of the material and the presige accorded by the involvement of Buckingham and Nicks, got Egan a contract with Columbia Records in the States. From that point, the pace quickened. The first Columbia single, Only The Lucky, crawled up the Hot 100 as far as 82 in the summger of 1977. The supporting tour was very successful, though, because of the tight band, sexually outspoken songs and the participation of Buckingham and Nicks. So, it was no surprise when Magnet and Steel, the first single puleed from Egan's second album, 'Not Shy,' reached into the Top 10. The second single from the album, Hot Summer Nights, peacked out half way up the Hot 100.

The third album, 'Hi-Fi', was much more a band effort. After the success of Magnet and Steel, Egan had formed his Professional Band, including his old partner Annie McLoone, together with John Selk on bass, Monte X. Moncrieff on guitar, Skip Edwards on keyboards and drummer Mike Huey. This time, Egan produced himself, and he and his new band gave the sound a harder, rockier edge than 'Not Shy.' In the process, Egan lost his audience. Colubmia released three singles; none of them charted. A similar fate befell his final Columbia album, appropriately titled 'The Last Stroll.' The songs didn't have the strength of Egan's previous albums, and Earle Mankey's production was too guitar-heavy. By the time the album was recorded, Annie McLoone had left Egan's band to pursue a solo career, and, as a consequence, his vocals sounded thin.

Columbia dropped Egan after 'Hi-Fi' failed, and he concentrated first on the reunion project with Malibooz, and then acquired a new contract with the MCA spinoff label, Backstreet. For them, Egan recorded the 'Wild Exhibitions' album, released in 1983. The first single pulled from the set, Full Moon Fire, charted respectably at number 46, but Egan couldn't sustain the momentum.

Egan maintained a low musical profile during the remainder of the decade, increasingly turning his energies toward graphic art.

Finally, in 1992, Egan resurfaced on the Malibooz's Malibooz Yule: A Malibu Kind of Christmas, and in 1999 released the solo Walternative. The Lost Album, released in 2000, was originally recorded in 1985 and featured guest appearances from Jackson Browne, Christine McVie, and Randy California. It was followed in 2002 by Apocalypso Now, another winning collection of sophisticated pop/rock.
In 2005, the Acadia label reissued Egan's first four records on two double-disc sets. In 2011, from his home in Franklin, he produced an album entitled Raw Elegant that was released on Spectra Records
In 2014, Egan returned with an ambitious new album, Myth America, and he continued to make occasional live appearances while also exhibiting his visual art.

Sounds & Scans
Posted by bristolboy at 08:28